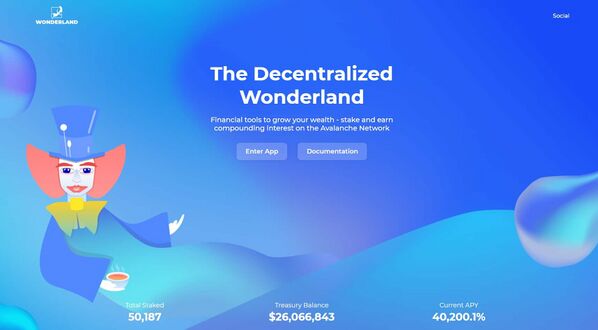 Wonderland is an Avalanche-based Olympus DAO fork that was founded in September 2021 by Daniele Sesta.[1] Wonderland is noted as the most popular Olympus fork. Proponents of Wonderland (and the greater Dani-verse of DeFi) refer to themselves as Frog Nation. At the peak of Wonderland, it surpassed $2b market cap[2] and total value locked (TVL).[3] In a January 2022 crypto twitter thread, zachxbt revealed Telegram direct messages from Daniele that alleged the CFO of Wonderland, Sifu, was Michael Patryn.[4] Patryn is a co-founder of Quadriga, Canada's largest cryptocurrency exchange that ceased operations in 2019 after the founder Gerald Cotten died[5]. Wonderland immediately voted to remove Sifu although this incident caused a major rift in the protocol's community that ultimately led to a rage quit option being voted on and passed by the community.[6]

In late August, Daniele began hinting on his Twitter account that he was building something.[7] It was announced that "Tomorrow is the $TIME" on September 1st.

It was around this time Daniele infamously tweeted that the protocol would share 33% of profits with Olympus DAO,[8][9] which ultimately did not happen.[10]

Wonderland went live on Fantom October 15th, 2021.[13] Daniele announced a Launchpad by Wonderland in the same month, launch to be determined.[14] According to Defi Llama,[3] the protocol first reached $1b TVL on October 26th.

Wonderland's first snapshot vote went live on December 17th and passed by 99.33%.[15] The vote was regarding Sifu's treasury management position.

To kick-off 2022, the protocol was able to secure an early investment in the decentralized crypto betting platform betswap.gg.[16] Wonderland eventually airdropped this to holders which in dollar terms ended up being $17.64.[17][18] Days later, the treasury balance reached the $1b milestone.[19]

On January 17th, Sifu tweeted that Wonderland would buy back at the backing price unlike most others.[20] While the token did rally the day after this tweet, in the next 10 days the token price fell more than 70%.[2]

It was eventually revealed on January 25th that the liquidation cascades causing the price decline were somewhat due to Daniele and Sifu's wallets.[21] A mere 2 days later, zachxbt revealed Telegram direct messages from Daniele that alleged the CFO of Wonderland, Sifu, was Michael Patryn.[4] This bombshell shocked crypto twitter and ended up producing many memes, such as "Funds are Sifu." Sifugate, as this event is commonly referred to as, also caused damage to Daniele's other projects Abracadabra, Spell, and Popsicle Finance.

TIME was the base token of Wonderland. Users staked time to receive MEMO. Eventually, the protocol deprecated the liquidity for TIME and transitioned fully to wMEMO.[22]

MEMO was the rebasing token users received after staking their TIME in the Wonderland protocol. MEMO means MEMOries.

wMEMO is the active token of the protocol. wMEMO, short for wrapped MEMO and Wonderful MEMOries, it does not rebase in the traditional form. As described in the Wonderland docs:

Wonderland renamed bonding, as seen in Olympus, to minting. By exchanging the desired bonding asset for TIME, the user received a discount (ideally) and the protocol received assets that they directly own. There were various mints available, one example from December 5th 2021:

So at this time, users bonding TIME-AVAX LP tokens would receive a 7.5% discount on TIME. MIM was a negative discount essentially because the protocol decided their treasury had enough MIM at the time.

Just as Olympus and all of the forks did, Wonderland was known for a wildly high APY in the early days. Users staked their TIME and received MEMO, which was an automatic rebasing token. In the same example above, Wonderland had 88,000%+ APY in early December 2021. This was a 5-day ROI of 9.7% (return in TIME, not dollars.) The protocol had over $2.0b total value locked (TVL) at this time as well.[24]