Optimism is an Optimistic Rollup, a layer 2 (L2) scaling solution built on top of Ethereum. It launched as alpha mainnet in January of 2021 and was fully EVM-compatible in October 2021. As of now, it counts more than 30 DeFi protocols[1]

Optimism began as Plasma Group, a plasma chain toolkit in January 2019, with the goal of expanding Ethereum's layer 2 scaling.[2]

In July of the same year, Plasma Group released a Medium article detailing the Optimistic Virtual Machine (OVM). The OVM is designed to support all L2 protocols and borrowed formalization heavily from CBC Casper research.[3][4]

Starting in September, Optimism gradually released their testnet due to demand. Synthetix was the first protocol to volunteer for the Optimism testnet.[6]

Optimism's full mainnet launch was delayed in March of 2021.[8]

Optimism opened up deployment whitelisting in August after their recent changes were running stable on mainnet. In December, Optimism was ready to remove the whitelist and allow anyone to freely deploy contracts.[10]

In April 2022, Optimism announced their governance plan, the Optimism Collective, and released highly-anticipated details about their community token airdrop.[11]

Optimism features the main kinds of DeFi protocols, like Aave as money market and Uniswap and Curve as AMMs. It also counts a variety of on-chain options protocols, which allow users to trade and earn yield on derivatives through different mechanisms. 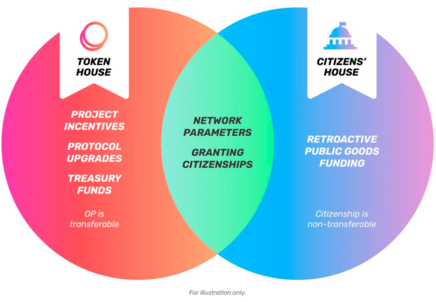 The Optimism Collective is the governance-arm of Optimism. There are two "houses" that have different responsibilities: Token House and Citizens' House. The launch announcement describes the Collective as the following:

The Optimism Collective is a large-scale experiment in digital democratic governance, built to drive rapid and sustainable growth of a decentralized ecosystem, and stewarded by the newly formed Optimism Foundation. The Collective is a band of communities, companies, and citizens united by a mutually beneficial pact to adhere to the axiom of impact=profit.

The Token House is a more traditional form of token governance. Users will be airdropped OP, the Optimism token, in order to vote on protocol upgrades, incentives, and more. The OP token is transferrable and is launching before the Citizens' House.

Optimism is a Public Benefit Corporation which is where the Citizen's House plays a role. Citizenship will be determined with non-transferrable NFTs, so the number of citizens will continually rise as more people use Optimism. Citizens will be able to distribute public goods funding which is obtained from revenue collected by the network.