Aladdin concentrator is a platform that boosts rewards for Curve & Convex stakers and liquidity providers alike, all in a simple and easy to use interface. Concentrator is a yield enhancer by AladdinDAO built for DeFi users who wish to farm top-tier DeFi tokens (CRV, CVX) at the highest APY possible.

How does it work

Farmers deposit their Curve LP tokens in Concentrator.  Concentrator stakes those LP tokens in Convex vaults.  Yields from those vaults are harvested, swapped to CRV and then staked on behalf of the farmer in the Convex CRV vault where they autocompound.  Users may withdraw any or all of their deposit and yield at any time in CRV or (zap to) CVX or ETH.

An autocompounder generally sells all farming rewards for a vault in order to buy more of the deposited token. The APY is generated by compounding the base rate, but the base rate for the yield is the same as that for the bulk deposit.  Gains are realized continuously rather than at a time chosen by the farmer.

Concentrator can capture rewards from deposits in multiple different Convex vaults and merge them into CRV where they take advantage of the high CRV staking rate on Convex.  Yields auto-compound at this higher rate, denominated in a top-tier DeFi token (CRV), and gains can be realized/claimed in CRV, CVX, or ETH at a time chosen by the farmer for maximum tax advantage.

The maximum total CTR will be only 5,000,000 and all of those will be emitted by the end of the IFO (with 50% distributed to IFO farmers). CTR has no team or investor allotment, nor does it have any involuntary lockups or vesting. Locking CTR to get veCTR will be available within a few weeks of the IFO period for users to lock their CTR and begin directing and/or receiving platform revenue. 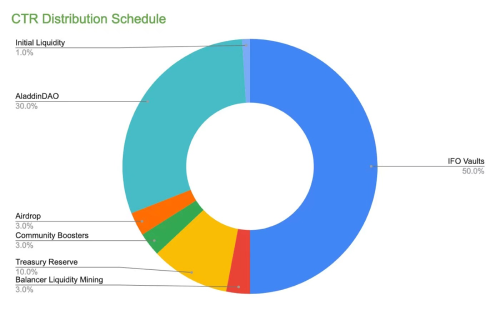