Beefy finance is a Yield optimizer protocol on mulitple EVM-compatible blockchains. Beefy is one of the oldest yield aggregators and it has maintained a total value locked (TVL) of at least $400m since May 2021.[1] 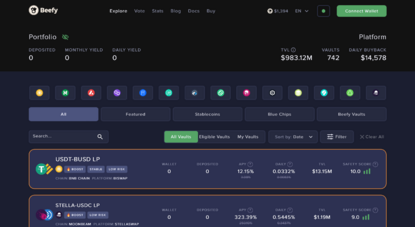 Beefy finance is currently available on almost all the popular EVM-compatible blockchains like Ethereum, Fantom, Avalanche, Harmony and many more.

The user deposits the LP token in these vaults and the protocol automatically harvests the rewards (most likely liquidity mining incentives), sells them to buy more of the tokens of the liquidity position and increases the LP position with them, finally redepositing the newly received LP tokens back into the vault. This process is called auto-compounding.

These vaults accept deposits of a single token and can either just farm and auto-compound the reward from a yield farm or, more frequently, use the following money market strategy:

By depositing into a vault the user receives mooTOKENs, a claim on their shares of the vault.

There are no deposit or withdrawal fees on Beefy (unless explicitly shown), but there's a performance fee of 4.5% that is already taken into account on the APY of the pools. This means that the APY shown is the actual interest the final user earns. Of the 4.5% fee, 3% is used to buyback BIFI tokens and redistribute them to the stakers, 0.5% is allocated to the treasury, 0.5% is for the strategist that developed the vault and 0.5% for the one calling the harvest function.[2]