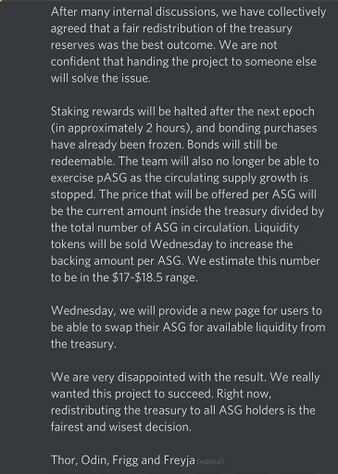 AsgardDAO was one of the earliest Olympus DAO forks. After less than a month, the developers redistributed the treasury to holders after being unable to manage the technical aspects of the project.[1][2][3] Not to be confused with the BSC Asgard DAO.

Asgard was announced over Medium on August 10th, 2021.[4] The token launched on August 13th and the "fair launch" sale lasted 7 days. The project announced a roadmap and their smart contracts on the 13th as well.[5] By August 18th, the project reached a peak TVL of $5.4m.[6] It was after this date the Asgard TVL would fall mainly due to concerns regarding the tokens that founders were preallocated.[7][8] The token price also fell from highs of $140 on the 18th of August to $10 in the coming days.[9]

By August 23rd, Asgard announced over Discord that they were going to redistribute the treasury to all ASG holders. Holders received 17.19 DAI per ASG.[10][11]